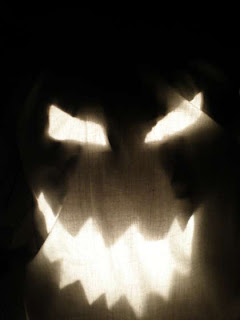 Inspired by Skulls in the Stars by R.E.H.

This ghost is the ethereal spirit of a person who was killed.  At night it haunts the area where the killing occurred, be it a house, dark alley, or a lonely heath.  It hates all living things and feeds on their fear.  Similarly, courage weakens the ghost.

*The Ghost begins with 5 HD.

Any round a character attempts to stand-up to or attack the ghost, they must save vs. Magic with a bonus equal to the Character's Level - the Ghost's HD.  If the character succeeds, the Ghost loses 1HD.  If they fail, they are too scared and must flee that round and the Ghost gains 1HD.  Similarly, if the character chose to flee on their own, the ghost automatically gains 1HD.

The ghost can reach a maximum of 10HD in this way.

If courageous characters/magic weapons reduce it to 1HD worth of HP or less it will flee to the specific location of it's death/body.  If it is reduced to 0 HP it dissipates.  In either case, the ghost will reappear the next night.

The only way to destroy the ghost permanently is to appease it(let it avenge it's death, etc.) or if it is destroyed by a high-level cleric turning it, etc.


Same as above, except use 1d10+COOL checks to fight-off fear(10 to succeed).  The ghost begins with 12 HP.  Successful fear-checks cause it to lose 1HP, while failures cause it to Gain 1HP, for a maximum of 25.  When the ghost is reduced to 4 HP it flees, 0HP it dissipates.