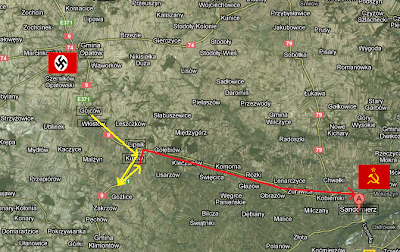 As opposed to the technical-problems in Session 5, in Session 6 everything just ran like clockwork.  In part, I think this was due to the players getting used to the game.  In part I think that my sandbox reached a certain level of maturity.  In any case, by the end of the session, the players achieved their goal of reaching the Russian-occupied city of Sandomierz, much faster than I had anticipated.  A lot happened in this session so I'll try and break it down rather than give a full summary.


August 29, 1944, the session started off with the party returning to the village of Lipnik.  Their their NPC companions, Jurec and Ludmilla bid them farewell and their PC medical doctor, Leora, stayed on to tend the wounded, promising to rejoin them as fast as she could.  As such, the two brawny boys, Andrei and Shmengy, set-off alone with their horses and a donkey.

As I said, a lot happened this session.  I had a lot of fun with this, generating almost 30 random encounters and events over the 3 hour session, including:
I also used the Luck mechanic a lot to answer player questions about various details.

A big part of why I generated so many events/encounters was that the players seem to have figured out how to get what they want out of the setting.  They played very cautious most of the time, hiding, traveling off the main road, masquerading as German troops, and generally not getting sidetracked from their goal of reaching Sandomierz.

The one random event they spent the most time on was, while crossing some empty fields, they stumbled on the remnants of a tank battle.  They immediately decided this as a low-risk opportunity for looting and the second tank they checked was found to be in pretty good condition.  This was when they took one of the session's bigger risks--Andrei rode back to Lipnik with the horses to fetch Jurec, in the hope that he could get the tank back in working-order, while Shmengy continued to loot alone.  But the risk paid-off, and by evening the 3 were siphoning gas and would soon be ready to drive-off(though none of them knew how to drive a tank!)

At that point, I rolled up a German patrol, in the form of three halftracks with almost 20 troops!  The PCs decided not to risk losing their hard-earned tank and took advantage of the dark to surprise their enemies with grenades and automatic weapons.

The party's ambush went their way, and destroyed the small halftrack, captured one of the large ones, while the third got away.  They lost their horses in the fray, but by the end of the session had captured a lot of materials, including:

I also got to use the clue generator twice.  It yielded:

On August 31, 1944, the party finally drove in to Sandomierz with their Panzer, towing the half-track.  They were directed to the head Quartermaster, to whom they donated the vehicles.  In exchange for their contribution to the war-effort, he promised to recommend them to Field Marshal Vladimir Yurlovich, head of the Russian Army, and he also gave them the use of a confiscated civilian car.

I think that next session, the Quartermaster will offer to take their extra guns/grenades in exchange for credit, which they can use to buy food/ammo and other materials from him.