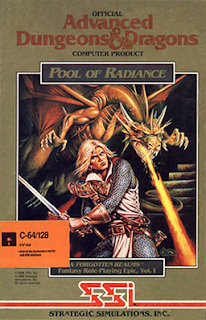 Born in 1980, and coming of age well past DnD's peak popularity, my induction to DnD was through TSR's computer games, and specifically Pool of Radiance. And while PoR wasn't the first computer game to bear the DnD name, it was the first, to my knowledge, to actually use the rules of DnD.

PoR was released in 1988, by SSI, a prolific computer game company famous for their War Games and their DnD games, licensed from TSR. I probably picked it up a year or two after it's release, being mystified by it's cover: a stoic, chain-mailed hero, swinging his sword at a firebreathing dragon. 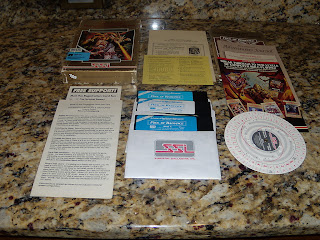 It quickly became, and remained, my favorite game on our Apple IIGS, not just for the game itself, but for the materials that came with it.  The equipment list, copy-pasted from ADnD, I soon had committed to memory from reading and re-reading, and it also came with a runic wheel whose use mystified me(apparently a creative form of DRM--photocopiers being rarer than they are today, not to mention the precise cutting required to fabricate it correctly).  I also spent hours going over SSI's sizable catalog of games, imagining playing each of them. And the game itself kept me busy for years.

Anyway, PoR was HARD. One of the reasons was probably that I was a kid. Another was that the encounters were very deadly. When sneaking around a dungeon, a party can often avoid encounters by being cautious.  In PoR, you were just told that you encountered monsters, and if you didn't surprise them, then chances were you were going to have to fight them.  And a large percentage of the encounters were difficult enough to result in a TPK for first level characters. Also, encounters were usually just on a big open map, so it wasn't like you could just fight them two-at-a-time at a choke point. At one point I realized that I should be fleeing more often, but since the monsters were generally faster than my PCs, you needed a head-start to make that work.

PoR let you change your ability rolls at character creation, so I generally pumped up all stats to 18 to have a chance.  But later, I read in the clue-book that the encounter-generator creates more difficult encounters based on your ability scores, so the joke was on me!

Anyway, for all it's difficulty, PoR was still playable due to the fact that you could save at any point. PoR kept me busy for years, but my party's progress was slow.  At one point I decided I wanted to invest in the Clue Book advertized in SSI's catalog. I went to the Southern California hobby store where I had bought the game but was told it was out of print. Then the proprietor told me something that I remember to this day. That he had worked on the game and that he could get me a cluebook free-of-charge even though it was out-of-print.  Wow!  I had never met a celebrity before, much-less such a generous one! (I believe it was Russ Brown, listed in the credits as a Programmer, though apparently it was more than just another programming job, since he later worked in a hobby store) Someone who had worked on my favorite game!  Anyway, true to his word, a cluebook arrived in the mail a month or two later, which helped my progress considerably and I even got to fight the dragon from the cover.

Anyway, SSI computer games continues to be my main exposure to DnD for a good number of years, until college, when a friend invited me to come play DnD 'for real'. I wonder if many other gamers of my generation first came to the hobby through the computer games and then made the transition to pen and paper.
Posted by Nadav at 22:58