Picking up we left off last time, the party met up in the lobby of the Waldorf the morning of January 16, 1925 to plan their next step.

They are waiting to hear back from the police and to meet up with one of Erica Carlyle's associates. For now they decided to follow up on the Emerson Imports lead.

This brought them to a subway to Harlem. Carmella ended up finding them a guide. At this point the party split with half of then following the guide and the others continuing on to 137th street in search of Silas. (Except for Dr. Milka who got lost in the subway and wandered off). 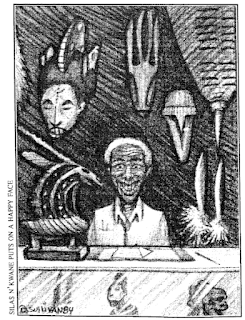 Carmella et al ended up eating Good Voodoo soup in a Hatian restaurant and hearing local street musicians on their way to 137th. Meanwhile, Donato, Michael, and Warren had a run in with the Bloody Tongue.

The three couldn't find the store, but noticed some shady-looking locals watching them. Michael, ever the murder-hobo, blasted a guy with his shotgun. Fortunately, the guy turned out to be a cultist. Unfortunately, he had a lot of friends. The three ended up surrounded by knife-wielding cultists and were soon tied up in Silas' basement...

When Carmella and the others arrived, the neighborhood was in an uproar over the shooting. They ditched their guide, Brad knocked out the cultist guard with a golf club, and they entered Silas' shop. They found the secret trap door, descended the stairs, and heard voices behind a heavy wooden door...

Jumping back to the scene of the first group's capture: Silas sent a couple messengers out(to call the priest of the cult). He began interrogating Michael, then showed him the creature in the pit when he refused to answer. Michael managed to hang on to his sanity. When he dragged Denato to the pit, the cop broke his bonds and attempted to grapple the cult leader. The heroic detective went down under a flurry of cultist knives!

Jumping back ahead to the rescuers' arrival: they busted open the door and came out guns blazing. Only Silas and the priest were there and they were easily dispatched. The party then opened the screen at the back of the room where they were met by the dead eyes of their friend Denato and several other zombies. After ineffectively shooting them, they lit them on fire and fled. Brad and Dr. Thompson lost some sanity from the experience.

The investigators discovered the cult's private stash of artifacts:

The investigators left the horrors of the Ju Ju House, having saved two of their friends and having dealt the Cult of the Bloody Tongue a serious blow. On the other hand, the creature in the pit was left unmolested and no cult members were interrogated to find out why they had murdered Jackson Elias...
Posted by Nadav at 06:45