A quick note about the first three sessions of our Call of Cthulhu campaign: 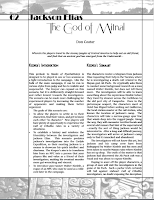 This last adventure was based on Don Coatar's adventure The God of Mitnal. It's a high-quality adventure for a fan-published work, but I found it a bit bland, with all the occult setup coming to nothing and explicit advice to go easy on the investigators. I was thinking how to spice it up and I thought of Joseph Conrad's Heart of Darkness.

I always enjoyed Heart of Darkness, but found the climax to be, well, anti-climactic. After this descent into the semi-mythic underworld in the dark heart of Africa, our narrator finds... Kurtz dying of Malaria and the natives really bummed out about it. I'm sure there's some deep postmodern message in that. No quest object or beloved Eurydice awaits our Hero's at the end of his quest. It was all for naught as there is only a great void at the Heart of Things. That's a powerful theme but makes for a dull plot point. What was rally lacking there is for our narrator to find Kurtz at his prime just as he's about to perform the great ritual to awaken Cthulhu from his eons-long slumber! The ritual goes wrong, Kurtz is left shattered, he is loaded onto the river boat. Denouement continues from there.

So in that spirit I made Kimbel the Kurtz character. Our slippery gun-runner has met his match in the form of the crystal skull of Au-Puch. He has spent too many hours staring into it's owlish eyes and with the loss of his sanity, it has persuaded him to perform the ancient ritual to break the seal and release Au-Puch, an ancient Cthonian deep under the ground. Unfortunately, Donato's Judo skills foiled that plan before things could really get interesting.
Posted by Billy at 12:08