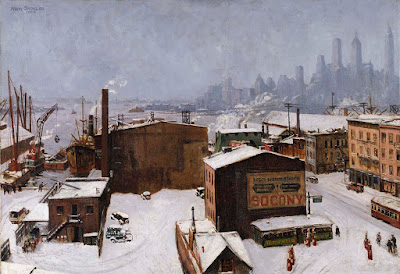 We pick up on a Wintry morning, January 17th on the old docks in New York City. Gretta is shipping Denato's remains back to Brazil. In one hand, she holds the telegram from the Federal Police, requesting the return of his body. In her other hand, she holds a note from Jonas Kensington informing her that Jackson Elias' funeral will be held the morning of January 19th in Evergreens Cemetery in Brooklyn. She said a few words about the brave Detective and watched the steamer pull away.

The investigators started the session with some some phone calls:

They called Erica Carlyle's associate Bradley Grey, wanting to reschedule Denato's missed meeting. They were less successful than Denato at convincing him that they had embarrassing information about Erica's brother, so he demurred from arranging a new meeting. He did let slip that Erica is due to attend a charity banquet tonight at the Excelsior Dance Hall.

They called Detective Poole about the car found idling at the scene of Jackson's murder. He asked the investigators to come in and talk with him. They were followed by suspicious characters on the subway, but lost them at the Police Station.

The investigators told Detective Poole about Denato's murder in Harlem. The quick Lieutenant connected it with the shooting yesterday, but was not aware of the scene under the curio store. He asked the party to take him to the scene of the crime. Regarding the car found at the scene of Jackson's murder, it was a stolen car owned by a Thomas Witherspoon, stolen while it was parked on Lenox Ave.

The drove with the Lieutenant and a couple constables back to the Curio store. They found the place boarded up so the Police broke-in. Downstairs they observed the blood-stains and fire damage, but the place had been cleaned out, including the pit-monster. Allen stole a bulky wood Masai Shield that he found upstairs. Lt. Poole went to question the neighbors about the Curio Store while the party agreed to check in with him later.

The party decided to crash tonight's banquet in an attempt to meet Erica. They quickly headed out to shop for clothes to wear. Artie managed to find a really great outfit(credit check +10). 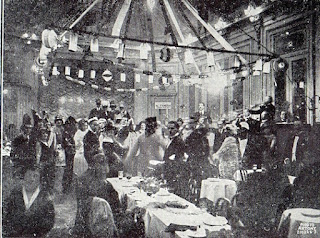 They arrived at the Excelsior to see guests arriving in their Limousines, being greeted by a priest with slicked-back hair. The sign said "Fundraiser for the Children of Africa". They eventually snuck in through the back entrance, convincing the maitre d they were delivering an African Shield to be auctioned to charity.

Gretta danced with an elderly financier. She used her reputation to get him to introduce them to Erica. Erica was also familiar with Gretta's work. They discussed the Children of Africa and Dr. Huston. When the conversation shifted to Erica's brother and his expedition, she got uncomfortable.

They also spoke to the priest, Reverend Pat Stephens. His mission had actually hosted the Carlyle expedition for a night. He described some of the expedition principals. He described them as a strange group. Carlyle and M'Weru were clearly together and he seemed quite infatuated by the beautiful Kenyan native. Dr. Huston seemed to be in a daze much of the time. Patty Masters was as beautiful as her reputation said, but seemed sick.

Next morning, they called Harvard Librarian Miriam Atright. She is a big Jackson Elias fangirl and wanted to help. She reported that Elias had sought a book called Africa's Dark Sects(which the party now have in their possession). The book had been in the Library's collection, but had disappeared a few months back. An unspeakable odor had lingered for several days after the book's disappearance.

The players bought fare on a steamer to Southampton leaving the morning of January 21st, planning to follow their leads in London. It's a 4 day trip, assuming fair weather...
Posted by Nadav at 22:41