We're picking up from last time at Darakin University on the planet Dorcin. The party had just convinced Professor Skoff to give them the location of the mysterious Yoberra system.

The professor took the party, via train, to the University's spaceport hangar. He asked them about the First Order and Rebels, and whether they would take him to his Rebel contacts on Yelsain to hide from the First Order. They boarded a light freighter, converted to a Research Vessel. Jonah stayed outside to guard the ship while the rest of the party climbed aboard. Professor Skoff started transferring the coordinates to Deeberjay's Astromech unit.

While this was happening, a couple heavily armed characters began approaching the ship. Jonah ran aboard to warn the party. The gunmen demanded the Professor surrender to them immediately. Jonah fired up the ship's engines and attempted to crush the two assailants. 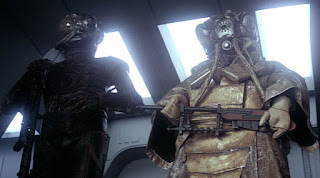 One was crushed, the other fought a cat and mouse battle with the party before eventually being cut-down by Art's lightsabre. Their terminal identified them as bounty hunters who were ordered to bring the Professor to Nodgra V. Deeberjay tried unsuccessfully to discourage Spaceport Security from arriving.

The party left the professor in his ship and made haste for their shuttle. They successfully bluffed the approaching security team. The space port was on lockdown so Lucky jammed the hanger entrance while Deeberjay hacked the hanger bay doors. The party took off in their shuttle. Once they were safe, they took the opportunity to argue about whether they should have brought Professor Skoff with them.

While heading for their jump point, three A Wings came out of hyperspace and fired warning shots. They announced:

"Lambda Shuttle Space Ball, cut your engines and prepare to be boarded!"

After attempting to flee, the party eventually won the fight and made the long jump to Yelsain.