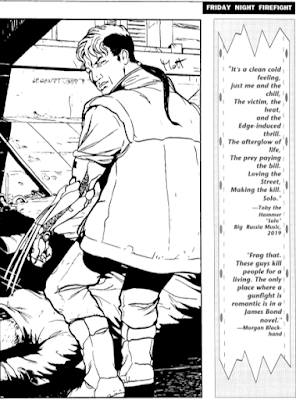 So this is a rules clarification post. SW2020 combat is, of course, based on Cyberpunk 2020's Friday Night Firefight system. Nevertheless, whenever the party enters combat, I always forget how it works and have to open up CP2020. So consider this a quick cheat-sheet for how combat works.

At the beginning of combat, all participants roll intitiative as 1d10+REF to determine turn order
On your turn you can perform 1 action i.e. Move, Attack, etc.

You can move 3x your MA in meters

If you fire a gun, you must roll your skill with the relevant type of firearm (10+REF+SKILL+Modifiers), against the To Hit number for the target's range. If you roll the target number or above, you hit!
Note: target is prone or firing from behind cover gives -4 to attack roll

If you have an automatic weapon firing a 3 round burst, roll 1d3 to see how many hits you scored.


Rolling to hit with grenades is similar to guns except that range=BODYx10m . On a hit, roll 2d10 to determine direction and number of meters away from the target where the grenade explodes. On a miss, distance is 10+d10m.

For a Melee attack, roll 1d10+REF+Relevant Skill vs. your opponent's 1d10+REF+Dodge Skill. If you beat their roll, you hit! 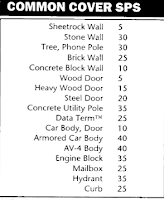 For each hit scored: