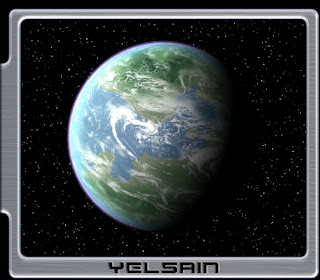 This session picked up where last session left off, exiting hyperspace into Yelsain System. Their destination: the mysterious planet Yoberra II in search of that world's little-known inhabitants! 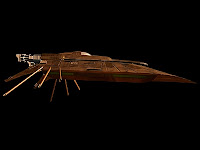 The party made their way to Yoberra, jumping to Squab, then Rocrin. On the way, they encountered a space yacht which they scanned and found was secretly armed. Upon contacting and provoking it, the pilot threatened them "You already got one of ours, but we'll get you in the end!" before speeding off. The party chose not to pursue them.

From Rocrin, they made the jump to Yoberra system and flew around the planet a bit, scanning it. They found life signs but no signs of technology. They ended up landing where the desert meets the jungle and exploring. Jonah stays on-board the ship with Snortbert while the rest of the party went into the jungle with Art clearing the way with his lightsabre.

As soon as the party was out of sight, the ship began to shake and sunk beneath the sand, much to Jonah's chagrin... 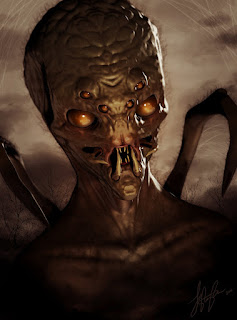 The party encountered the Eight Legged, insectoid Yoberrans gathering flowers and hunting Yoberran Jungle Boars. The createred did not seem overly intelligent, but a group of six was observed using force powers to stun a boar. The party followed them underground through one of their tunnels.

Jonah was also overpowered by many Yoberrans and brought to meet the rest of the party.

They encountered a cavern with about 100 of the Yoberrans and now were able to communicate. The Yoberrans created a hovering light source with the force and expressed curiosity about the party. They invited the party to increasingly large groups of Yoberrans who become more and more expressive and intelligent. In a group of around 10,000 Yoberrans, with Force-lights zooming around the room and the party being levitated in the air, the Yoberrans told of their grand galactic history, their being pushed out of system after system by other races, and their retreat to this secret planet. They admitted to having stolen small observation craft which they use to keep away outsiders.

The party described the First Order's rise and the Knights of Ren's search for the Force-Using Yoberrans. The Yoberrans agreed to help the party in combatting the First Order if a large enough ship could be brought. With 100,000 Yoberrans on a ship, they could wield enormous  Force-Power against the First Order's fledgling Navy.

The party was sent-off in peace with a ton of Yoberran Flower Mulch, which has powerful medicinal properties.
Posted by Billy at 21:00