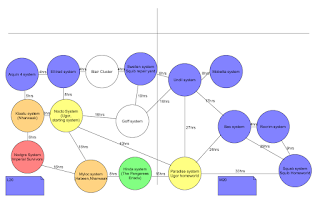 Picking up from last session, the party jumped from Yoberra to Rocrin system. They were quickly hailed by a passing space-yacht. After being harassed by a yacht last stession, they were worried, until they found out it was their friend Deeberjay, hitching a ride with friends and coming to join them.

Deeberjay had some news for the party, who hadn't docked at any Airam ports in a while:

The party first considered trying to capture the Star Destroyer as part of their plan to acquire a large ship and fill it with Yoberrans. Then then abandoned that plan and decided to dock at Skor II in Squab System and convince the government to supply them with a large ship. They finally decided on a third plan to land in Rocrin and see if a large ship was available there as part of the Squib salvage operation.

They landed at the Rocrin V spaceport, bought a monthly salvage license, and took their hovercar two days to the site of a crashed Imperial Heavy Cruiser. After inspecting the wreck, they realized that, while it was a very large ship hull, scavengers had already stripped it of all major systems and it would be a difficult project to tow it into orbit and bring it to a repair yard.

The party ended up excavating the lower decks over the course of a couple expeditions. They salvaged: 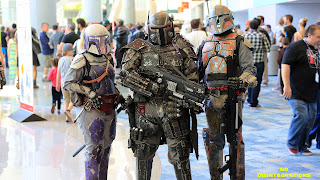 They also sold off the Ore they have been carrying around for a long time. The entire expedition netted them upward of 50,000 credits, but they were no closer to finding a large ship for the Yoberrans. On their way back to their shuttle, the party were accosted by a trio of Mandalorians seeking the Darakin bounty on them. They told Deeberjay to leave since no Squibs were mentioned in the bounty. He pretended to comply, leaving and rounding a corner.

Lucky, who had first initiative, tossed a thermal detonator at the hunters. The subsequent explosion killed the large one in the middle and left his friend on the right shell-shocked on the floor. Art ducked around the corner and began to use his Force Reflex Boost skill. The remaining Mandalorian shot Lucky in the chest, leaving her stunned on the ground. At that point, Deeberjay snuck behind her and slashed her with the spare light sabre he had gotten from Art, leaving her bleeding and stunned on the floor.

The party tied up the surviving bounty hunters and took them and their ship up the gravity well and into orbit, with plans to head for Skor II.
Posted by Billy at 15:15