Well, due to summer vacations, Sessions 11, and 12 saw my two PCs Seigwart and Sigyn, wandering around Altdorf on their own.

Sigyn has been trying to make a name for herself as a singer, and Seigwart has agreed to represent her as her manager, for possibly dubious reasons.  They caught wind of a VIP who is supposed to arrive in Altdorf shortly, who has the connections and may have the will to help Sigyn get a gig in one of the more posh local venues.  BUT when his arrival is unexpectedly delayed, they agree to go out looking for his coach.

They actually managed to find his coach along the road, under attack by beastmen.  After saving the day and escorting the grateful gentleman back to town, they are forcefully conscripted by the authorities to join the force being sent-out to hunt down the remaining beastmen.

Seigwart, having recently changed careers to Seaman, occupied himself with learning how the military manages their riverboats, while Sigyn flirted with a gunner, trying unsuccessfully to persuade him to let her fire his Bombard.

They eventually disembarked with a platoon of militiamen, fought a pitched battle with a force of Chaos Beastmen, and defeated and captured their Chaos Warrior leader.  The fight with the Chaos Warrior was pretty brutal, with his first hit rolling a critical and bringing Sigyn down to 0 wounds.  She struck back however with an even more brutal critical hit, stunning the brute and allowing them to capture him.  As a prize, she took his sword and shield, which may or may not have been a good idea.

In Hero Quest, which we played obsessively as kids. Chaos Warriors were the baddest dudes around, so it was fun to take one on "for real". 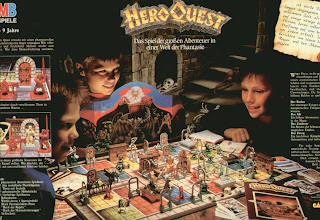