I was listening to Paizocon 2013's "Horror in RPGs Panel discussion" when they made a point that surprised me.  The speakers were giving DMing advice for how to run a Horror game and a lot of the tips were about how to create the right atmosphere(as well as some amusing anecdotes about DM's who take this too far). For example:


Some of these ideas I really liked, others less so.  Anyway, among all these tips for creating mood was this one: 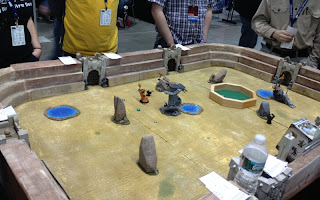 Now that one took me for a loop.  I'm not the biggest user of miniatures, but I do occasionally put them to use to set-up a particularly large or complex battle.  Why are miniatures so supposedly antithetical to a Horror game?

The answer that the panelists gave is what they call the "Found Footage Element".  You want the players to see, in their mind's eye, what the character sees.  As soon as they are using miniatures instead of their own imaginations, then the storyteller's magic is dispelled, together with any potential for fear.

To put it another way, when setting-up a horror encounter, you want your players' first response to be "Oh my gosh, what is that?  Get me outa here!" not "OK, so here's a choke-point to set up ranks.  There's a side-passage for you to try and flank it...".  So you want your description to do the work, not a detailed map of your surroundings and everyone's position.  And your description will be vague, tactile, emotional.  It likely won't be clear to the players/characters what type of creature they are up against, just the vague glint of fangs in the dark, or a smell, or a deep panting sound. This sort of gets into the idea of Furtive Monsters, where the way the DM presents the monsters goes a long way to creating an atmosphere of horror.

Anyway, that's the idea.  So when I'm trying to set-up a complex encounter which will challenge the players to come-up with original tactics to overcome their adversaries, then I'll bust out the miniatures.  But when I'm exposing them to the brooding horror that dwells beneath the Earth, then I'll leave the props in their box.
Posted by Billy at 05:57