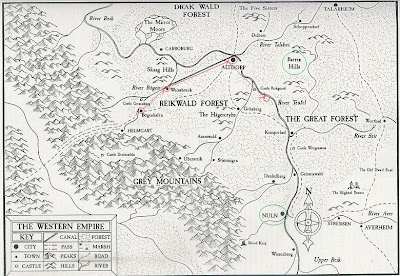 Well, with the start of a new academic year, our group got back together after a couple solo sessions.

The Beginning of an Intrigue


After a bit more discussion of training and careers and equipment, the party left Altdorf and continued South, via riverboat.  The idea was to follow-up a lead in Nuln, really for lack of any other options. Along the way, we caught word of some significant current events: 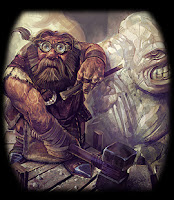 The party was stopped by a couple dwarven engineers, just past Castle Reikgard.  Their signalling tower has been plagued by disappearances among the workers.  The party staked-out the location and found a hidden dwelling in the ancient base of the tower, full of undead.  They found:

Sigyn got to try out the shield and sword she won from the Chaos Warrior.  After some experimentation, she found that the shield is unusually sturdy(+1) and the sword seems to contain a cold enchantment(failed toughness test does an extra 1d3 cold damage).

One of the players stated that this is a hallmark of Old-School gaming, not telling the player the bonuses from the magic weapon until their character has gained an intuitive understanding of such.  It seems to me that this makes magic weapons seem more special, as opposed to just giving a generic set of stats upon winning the weapon.

In any case, I was surprised, since WFRP states that magic items tend to be a double-edged sword, and I won the things off of a Warrior of Chaos, yet there didn't seem to be any deleterious effects.  Then the GM told me after the session "Now we need to roll to see if the sword takes control of your mind".  Oh boy...

One of our players put together a WFRP character sheet as a Google Doc.  It looks nice, especially on a tablet.  It's on this Blog's Resources Page, so feel free and copy and use...
Posted by Billy at 12:42