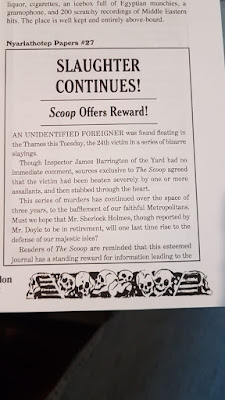 Israel is in Corona Virus lockdown, so this session was run via video chat on the Zoom app. The video-chat has it's challenges, but I think we all needed an escape from current events...

Thursday, January 31, 1925. The Investigators have one more lead to follow-up in London. Will this finally lead them to the cultist conspiracy that brought them all the way across the Atlantic?

The party visited Detective Barrington in Scotland Yard. A lot came out of the conversation:

The party decided to check out the Blue Pyramid. The waitress left them a note to come back tonight and talk to Yaelesha. They spotted a dapper gentleman in a fez who was speaking in whispers to an acquaintance.

When they returned that night, they Alan thought he spotted Gavigan in the crowd. On a dark, foggy street, Gretta was attacked by a tentacle fog thing. The party managed to scare it off with a couple Electric torches. They heard fleeing footsteps, but didn't manage to apprehend anyone.

Returning to the Blue Pyramid, now packed with people, Michael managed to contact Yalesha. She met him out back, saying that she wanted revenge on the Cult for her boyfriend's death, and hinting that Michael might become her new boyfriend. She let him slip some money in her thong, which is not bad for a first date!

Yalesha said that once a month a large number of Pyramid customers pile into a truck around midnight. She doesn't know where they go, but she knows it is cult related, probably outside London. The night of February 2nd is the next such date by her calculation!

The next day, Friday February 1st, the party told Mickey Mahoney about their close call. He fished out the following article from the recent archives: 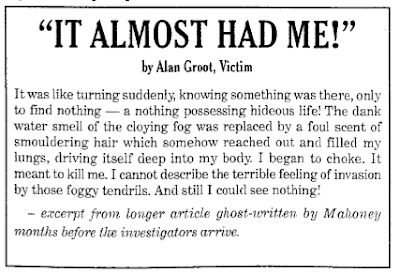