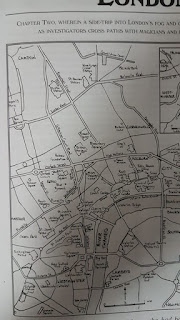 Friday, February 1st, 1925. With a couple days to kill until their stakeout, the party decided to stay out of trouble and hang out at the office of The Scoop. How well do you think that went?


Mickey received a call from one of his contacts: a suspicious truck has been sighted outside the Penhew Foundation. He convinced the party to go check it out.

They ended up stealing the truck and taking it to Hyde Park. It was full of various types of contraband, from Mythos statues, to Tommy Guns, Mustard Gas Grenades, Heroin...

After stuffing their pockets with goodies, the investigators exited the back of the truck and... were immediately confronted by a pair of Bobbies out on patrol. Mike shot one dead, but the other escaped. Mike also shot a lady witness out walking her dog!


The Investigators checked out of their hotel and into another one in the same area to avoid complications.

In the morning, Inpector Barrington called them in their new Hotel, inviting them to come meet him at Scotland Yard and discuss a lead. The party were suspicous, but Thomas and Gretta went to meet him. He implied that he knew about yesterday's events and that they would hang if they couldn't help him finally solve the Egyptian Murders. They told him about the stakeout tonight at the Blue Pyramid. He kept Thomas in custody and agreed to meet them there.

That night, the investigators staked out the club in a van with half a dozen police officers. The truck came as promised and picked up a couple dozen cultists. They drove to an estate in Essex by the North Sea. Barrington instructed the investigators to break in and get evidence that the police could use as probable cause to storm the estate.

They ended up impersonating a group of cultists, arrived late to the ritual. They crossed over on the cultist ferry boat, knocked on the door of the estate house, and were served drinks. The party ended up finding a hidden entrance to the basement treasure trove of the Black Pharaoh Cult leaders, but were set upon by the cultist household staff. After a close quarters fight, they found leads to cultists in other countries and evidence that some of the Carlyle Expedition members may indeed still be alive! 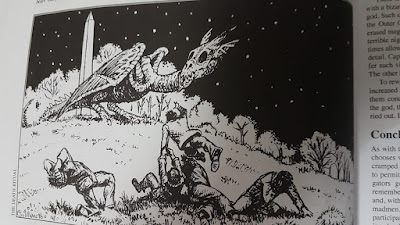 Thomas proceeded up the hill to observe the Ritual. It was some heady stuff even for the experienced MD, but things really got wild when a winged creature flew in from outer space and started eating willing cultists. An exhausted female cultist told him to climb on it's back so that he can be taken to meet the Black Pharoah in Azathoth, but our hero demurred and returned to the mansion.

Our heroes were leaving just as the police arrived, having thought that an illegal smugglers aircraft was landing. They shot their way through the crazed cultists and secured the facility. At this point, the Inspector congratulated the Investigators, but suggested that they leave London ASAP and don't return.

In the Sunday Morning's papers, there was a writeup of the events, but Edward Gavigon's name was conspicuously missing from the list of cultists. As the party was packing up to go, a fearful looking middle eastern woman bumped into them in the street. "They have taken Yalesha!" she said. "You might have brought down the cult, but their leaders, Edward and Tawfik have escaped! They will take her to Cairo where they can properly avenge themselves on her!" she shuddered, before running off.