CoC 10: the Eye of the Beholder 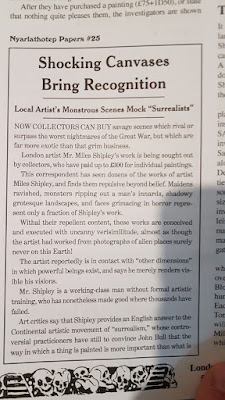 Following on the heels of last session, the investigators are back in London, doing what investigators do. This time they followed up on the lead about otherworldly art...


January 30th, 1925, the party visited the Soho apartment of one Miles Shipley and his elderly Aunt. She showed them his horrifying paintings of other planes and planets and times. Much sanity was lost by all.

Eventually the party convinced her to show them Miles' masterpiece, hidden in a cupboard. Dr. Milka was entranced and sucked into the painting where she got to see dinosaurs(cool!) and get sacrificed to the dark god of the Snake-People(less cool!).

The party fought the aunt, who turned out to be a powerful Snake-People sorcerer. After a tough fight, they were victorious and captured Miles and the strange drug he is addicted to.

They returned to The Scoop and made some money on the story.
Posted by Nadav at 07:17