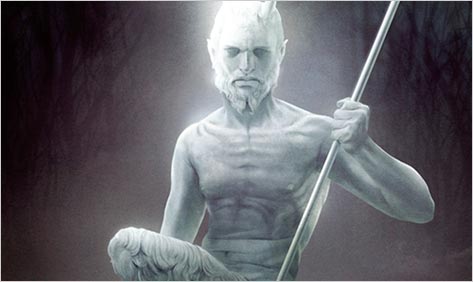 Reading through Machen's "The White People and Other Weird Stories", I can't help thinking about how different contemporary fiction is from classic Weird Fiction. The major Weird authors had strong beliefs about the world, which look anachronistic by today's standards. And yet, those beliefs give their fiction an power and an energy that most current fiction lacks. Let's take a look at a few examples of Weird Authors and their major messages:

A Christian mystic, Machen viewed the growing materialism of the Modern era with great unease. His works reveal the hidden realms of the holy and the profane hiding behind the facade of everyday life--realms in which Machen really believed. His novella A Fragment of Life is a particularly subtle yet effective example of this.

Another of Machen's themes is distrust of Science and it's Irreverent outlook on sanctity and morality. From this mindset grew his most well-known horror story, The Great God Pan.

Howard, like Machen, was also unhappy with Modernization, but for entirely different reasons. Growing-up in various towns in the State of Texas, Howard saw a growing contrast between the previous generation's tales of the Texas Frontier and the increasingly urbanized existence spreading across the continent. This feeling of being closed-in and confined by Urbanization gives Howard's stories their unmatched energy. Writing was this author's escape, and he approaches it with all the gusto of an inmate fleeing his prison. In Howard's writing, everything is larger than life, but written with the complete conviction that this is how real life is meant to be.

Ah, Lovecraft. There's a lot to say about Lovecraft, but one of his major themes is that the universe we live in is ambivalent, if not hostile to Human life. The idea that, if we're unfortunate enough to encounter some of the strange forces or denizens out there in the Cosmos, then Humanity's short history will come to an abrupt end.

Another of Lovecraft's themes is building horror on the back of our xenophobia. People have a fear of The Stranger which borders on the instinctual. From what I understand, Lovecraft expresses a fear of the influx of immigrants into his native New England in some of his correspondences. I would suggest that it is this very bias that injects such strangeness and repulsion into his descriptions of the denizens of Innsmouth and the "mixed-blood" sailors in "Call of Cthulhu".

This is Why We Can't Have NiceWeird Things


Now, you might rightly accuse me of being a post-modernist windbag, describing these excellent authors as the mere sum of their individual beliefs and biases. Could be.

At the same time, I think there is something here. You don't hear so many authors in our age giving such succinct theories of the world around them. There was something about the turn of last century, a certain confidence in our ability to sum-up the world with one well-thought-out theory, that doesn't exist today.

Society was reaping the economic rewards of modernism and industrialization, science fiction was turning out hyper-optimistic prophecies of rationalist utopias, and political theory was inventing systems, like Communism and Fascism, to create just such utopias. The world seemed so much more black and white back then, and the classic weird authors, products of their time, had their own well-crafted theories about what was wrong with the world. Their outlooks, in today's context, come-off as naive at best or chauvinistic/racist at worst. That said, their world-views gave their writings a power that remains unmatched till this day.
Posted by Billy at 00:06