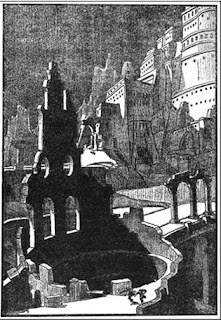 In a recent post, I discussed building an atmosphere of suspense and horror in your game sessions and gave a table of random, suspenseful events. That table felt a little ad-hoc and contrived to me, so here is a more polished approach:

When the party has an encounter, don't have the monsters run right away to attack them.  Instead, have them hide.  Maybe then they can follow the party furtively.  Maybe they'll shoot a poison arrow or try to drag-off a party member who wanders too far from the rest of the group.  Maybe instead they'll try to scare the party away or lead them into a trap.

For instance, Goblins in this approach would be closer to Goblins in folklore and pulp fantasy than to Tolkien's warlike Goblins.

In addition to actual encounters, the DM can include random events which show the monsters' presence.  This could be footprints, signs of a campfire, etc.  This can be done via a table of such events or via the more general random dungeon restocking.

Tales from the Crypt

Before the characters even head-out, have an NPC who has encountered the monsters.  To create the right effect, his account should be unclear, but ominous.  Maybe he's a hopeless drunk, or maybe an old man who explored the dungeon once in his youth, or maybe the town gossip who tells all sort of wildly inaccurate tales.