The Hunt for Haman's Sons

So at some point during last week's Purim meal, I ran a game for the kids present(ages 4-8 I think) together with the help of a friend. This was particularly challenging both due to the young age of the players and because of the millennia-old Purim tradition to drink "until one cannot distinguish between the Cursed Haman and the Blessed Mordechai". I can't really claim to have reached that point, but I did put in a decent effort all the same...

In any case, due to the young age of the participants, the decision was made to run a LEGO/d6 based game with the simplest rules possible. This is what we came up with: 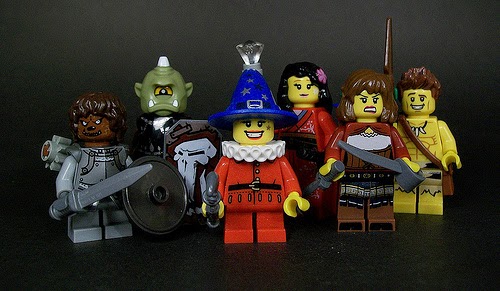 
As for the scenario, the Book of Esther relates that for two days the Jews in Shushan fought their enemies and slew the 10 sons of Haman, but no details of this adventure are given.  As such, the kids were told that they were following up a rumor that Haman's 10 sons are hiding in an abandoned villa(which I build ahead of time with the help of my kids). The scenario basically divides into 4 encounters: When I actually ran the scenario for 4 very excited kids, they had a blast putting together their characters, but then, once the game got started, almost all the rules got thrown out the window. Equipment-based stats and movement rate were simply not an option given the manic energy-level in the room, and the only Magician just wanted to flame-hands every turn anyway, so not much variety in spells cast. Matters were further complicated by the younger kids' really unique method of indicating which enemy they were attacking, by smashing him(and any of the Manse's walls that happened to get in the way) repeatedly with their own character!

In any case, Haman's sons didn't stand a chance against these young Murder-Hobos and once the smoke had cleared, my kids reported that the game had been most satisfactory. In other news, our hosts reported that they are still finding LEGO pieces scattered throughout the house.