So I got to thinking what adventure hooks I would give if I ran a sandbox game in Warren's Deep today.

For one thing, I would use some published modules. When I originally ran it via Play by Post, I used all original material(except for a few standard creatures from OSRIC). PBP is good at that--you have lots of time to plan the next step and just go with the flow. In a live game session, on the other hand, it's harder to give your dungeons the same depth when you're making it up as you go.

So now, I can think of four published modules to include in the sandbox, in addition to original content. I would, of course reskin them, to give them my own touch and to try and obfuscate them a bit in case any of the players have read/played them in the past.

So to begin the campaign I would probably tell the party it's the start of Winter and they are new arrivals in the area, having just arrived by boat in the city of Warren's Deep.They can root around town looking for work or adventure(perhaps in the "Sea Elf's Daughter"). Here are some of the rumors they might hear: 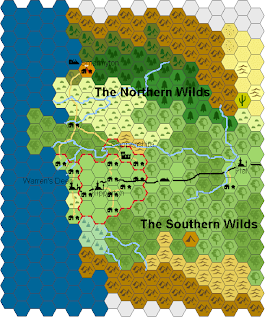 Some of these are from my original campaign, some of them are new, and some actually refer to events that happened in that game. Rumor 6, for instance, sets this campaign as being a few months after that campaign. I realize this continuity doesn't interest anybody but myself, but that's the thing about world building--if you want to do it right, you should probably just embrace the fact that it's 90% for you and 10% for the players who only really get to spent a very short time in your world.
Posted by Billy at 13:18