I'll let our DM summarize the party's current progress in his own words:

When the group got back to Greenest to return some found stolen items, they were told that the monk had come back to town and bought some horses for the heroes to take quickly to Elrethen (sp? or some city like that) to help with a problem much larger than just Greenest. With luck, they would be able to find a shortcut and cut off the bandits and find out where the loot was being taken two.

In Elerethen , the Monk and a paladin named Frume, offered the heroes to either Join the Harpers or the Gauntlets in a mission to save the world from the plots of the Dragon Cultists. By joining the organizations, the heroes would be able to find contacts to help them in their quest.

Most of the heroes joined either the Harpers or the Gauntlets but some refused. At this point, the monk offered a reward of 1,200 gp ruby from the harpers in Neverwinter.

The heroes were tasked with following the caravan out of Baldur’s gate to see where it was headed, who the loot was going to, and who was helping out the bandits and the cult of the dragon. However, Baldur’s gate does not allow wagons or animals into the city, and so they have to exchange their horses, and spy out Rezmir the half dragon who was in charge of the Dragon cult through the city and out of the north gate onto the trade road. During the spying mission they discovered 5 of the 12 wagons belonged to the cult, however 1 cultist guard was sent to defend each of the 12 wagons, so which wagons belong to normal merchants and which belong to the cultists, is hard to tell….


After lots of shopping, and being hired as guards, the group followed the caravan out of Baldur’s gate and for 4 days everything was fine, but on the 5th day they ran into a group of hobgoblins hurting a noble and some guards. After rescuing the noble, and healin the guards and one of their own fallen gaurds from the caravan, the hereoes continued onward, having a tough night’s rest.


So now we have 10 days in Balder's Gate. Sir Manly set to work trying to set up a base for worship of the Holy Turnip. The results:

In addition, following the death of Battle Mage, he has recruited a new party member: 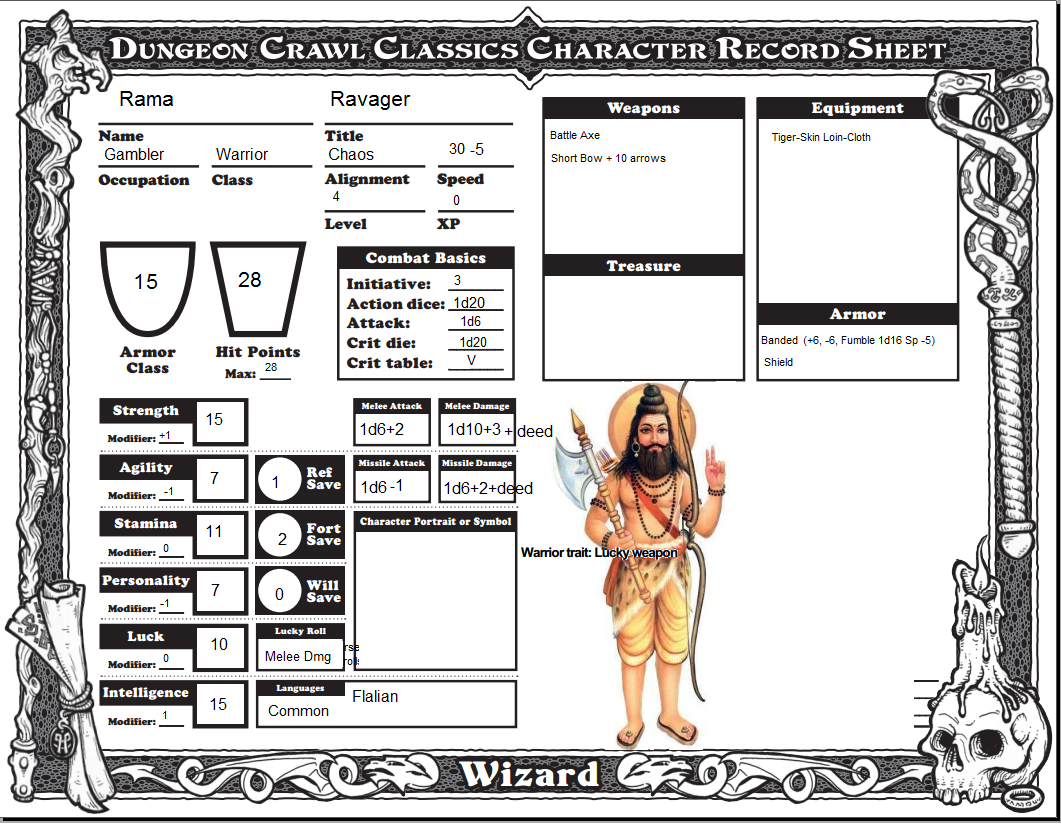 One evening, relaxing in the tavern, Sir Manly comes across an impressive looking, serene-faced warrior. He feels strangely drawn to the soft-spoken man, with the foreign sounding accent. He confides in him about the party's mission to destroy the dragon cult. After a few moments contemplation, the warrior declares placidly "I will join you. You may call me Rama"


Rama is a warrior from Flal, a member of an elite warrior caste, dedicated to returning the world to it's perfect state of chaos through destruction. His reasons for appearing in Baldur's Gate are unclear or perhaps even inscrutable. In any case, he will happily join the party to ply his trade, seeing the slaying of Dragons as a spiritual ideal to be sought after.