So, I've been wanting to try playing a DCC RPG Wizard for a while now. I don't usually play magic-using characters, but the colorful, if somewhat byzantine, magic rules from DCC hold some unique appeal to me. Of course, when am I going to have the chance? No one in my gaming group is likely to run a game of DCC any time soon. 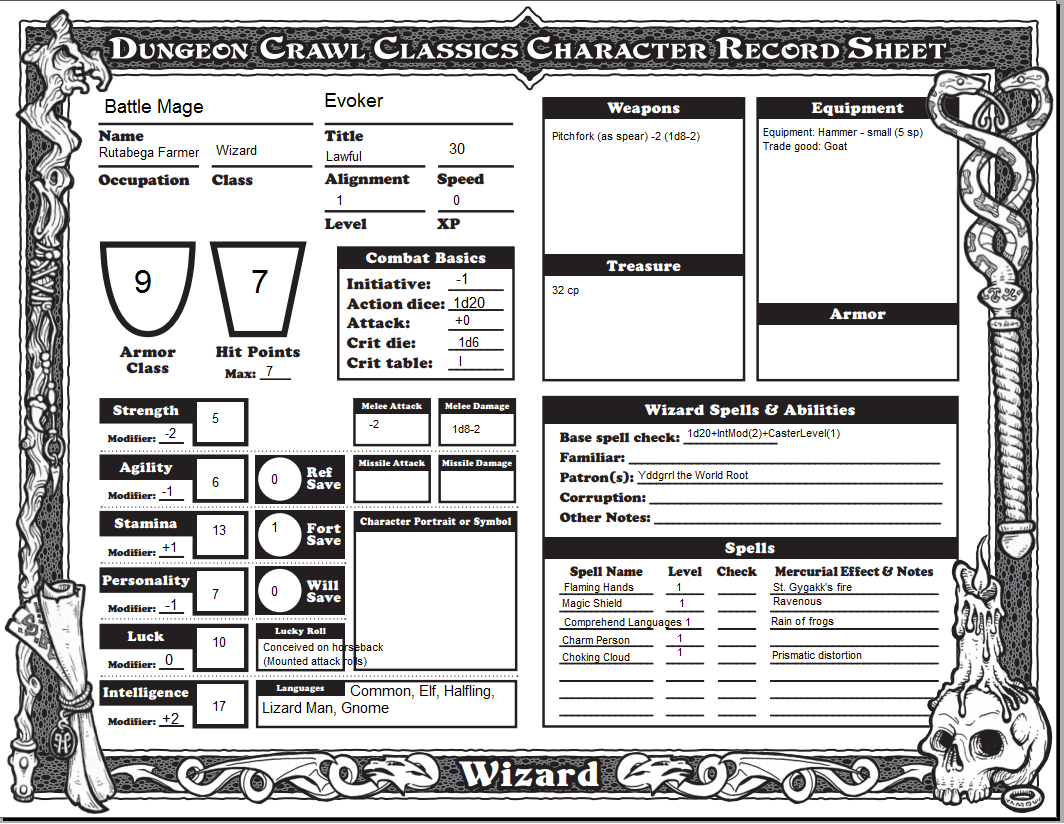 So, in the spirit of FLAILSNAILS, I managed to convince our current DM to let me bring in a second PC, a DCC Wizard type, into his 5E game. So here he is--meet Battle Mage!

He's a hedge wizard, apparently from the Greenest area. He still lives on his parents' farm, so that he doens't have to come up with rent while he concentrates on his magical studies. He insists on everyone calling him "Battle Mage" though his Mother still calls him Terrence and his father generally tries to avoid contact with his poor excuse for a son.

Well, Battle Mage, will no doubt join the party in order to earn his name fighting the invaders to this normally peaceful land. Rugby, the family goat, has followed him on his way and refuses to go home, so he's there too.


So, apparently someone at DCC looked at DnD magic and said "Yes, it's Vancian, but it just doesn't capture the insanity of Rhialto the Marvelous". The Mercurial Magic Rule in particular, is, quite frankly, inspired. For instance, whenever Battle Mage casts Comprehend Languages, it rains frogs, thus making a dull spell infinitely more amusing/useful.

I'm looking forward to seeing how the DCC magic system works in actual play. My only worry is the amount of material I need to bring. I wrote quite a few notes on how the DCC magic rules work, plus I have to print out Battle Mage's spells(a page each), critical hits table, patron info, the misfire/corruption tables, and the list of spellburn actions. That's a lot more reference material than I like to have to bring to the table. In any case, it's probably time for me to add a hard copy of DCC RPG to my next Amazon order...
Posted by Billy at 21:23