I Want to Run a Lovecraftian Horror Game Like This

Wow. Samsara Room is a weird game. Weird rituals, resulting in bizarre dimensional journeys with freakish self-transformations. My favourite is when you become a worm-man so that you can climb inside the guys corpse.

I'd like to run an RPG that has this sort of weirdness. Except that I think Samsara Room didn't take it far enough, ending with mere discomfort rather than cosmic horror. I'd like to see that weirdness grow into a brooding horror. Something along the lines of The Dream-Quest of Unknown Kadath, The Dreams in the Witch House, and the Silver Key stories when taken as a whole. There's something very powerful about this sort of story, the Curiosity Killed the Cat horror story. First the reader's curiosity is piqued, along with that of the protagonist with bizarre yet wonderful discoveries. Yet as the protagonist journeys deeper into the unknown, the feeling grows of a moth drawn towards the flame, until the bizarre and inhuman horrors ultimately reveal themselves.  Machen's The White People is a great example of this, with an innocent young girl whose supernatural journeys ultimately lead her to take her own life to avoid an even more horrendous fate. 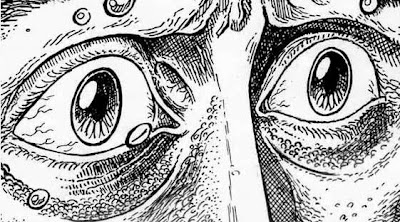 This would take some good game design/DMing, so that the players' curiosity ultimately makes them want to continue further, rather than returning to their safe yet mediocre lives. I'm OK with the players chickening out, but it should be a hard decision to make. Or, if that sounds too hard, you can go the "Through the Gates of the Silver Key" approach, where the PCs are trapped and retreat is not an option.