Superstitions of the Residents of Old Town Sandomierz 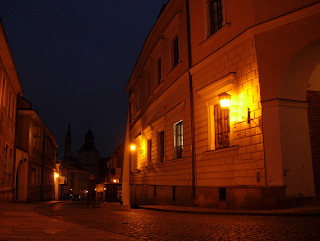 The Old Town is a remnant from the middle-ages in the heart of the small but modern city of Sandomierz.  The residents have a number of practices and superstitions unique to the area, which appear to date back, in some form or other, to the earliest settlement of the city.  These practices, which generally revolve around the basements of their residences, are generally not well-known among the general populace, who reside in the newer neighborhoods of town.  That said, the superstitions do occasionally come to light, for instance when a city project to renovate the lower-levels of one of the local churches was nixed due to "strong opposition by local residents".


The most unusual practice is perhaps the burial traditions in the Old Town.  Each home in the area has a small stone vault built in the basement.  When a family member passes-on, their body is interned in the vault for a period until the body decomposes, and only the bones are left.  The bones are then relocated to one of the city's local cemeteries.

Recently, a Doctor, having recently moved to the city and heard about the tradition, noted that the interment period was too short for such complete decomposition to take-effect.  Rumors began to fly and the locals lengthened the interment period surreptitiously.  The public quickly lost interest in the scandal.


Residents of the Old Town of Sandmierz do not allow renovation of the town's basement level.  In the case where new residents moved in and wanted to renovate, these plans were not approved by the city-planning board due to the strong objections by their neighbors.

One local historian speculates that this is due to the basement-level being afforded a semi-reverential status due to it's use in the burial process.  But wilder explanations are whispered by the more imaginative.


Residents of the Old Town will only enter their basements during the day-time.  Even then, they do not dally there.


Residents of the Old Town have an interesting variation of the All-Hallows' Eve tradition.  The afternoon before, they slaughter an sheep, chicken, or other small animal and leave it in their basements as an "offering to the spirits".  In the morning they bring up the left-over bones and show them to their children, telling them that the spirits have been appeased.


Adventurers entering Sandomierz may hear a number of rumors, but they will really have to investigate a lot to find out these traditions in all their details.  Some initial rumors they may hear from non-residents include: