So a while back I decided to try out something new.  My 4-year-old was bored and not in the mood for a book, so I pulled out a d6 and said "Let's try a new game!  What animal do you want to be?"  The simple RPG that evolved is now known as "Doggie Game".  So far I've run short, independent sessions for her solo, with her 6-year-old cousin, and with a couple visiting gamer friends.

My first observation is how quickly kids pick-up on the concept.  It took my daughter a few minutes to "get" the game.  Her six-year-old cousin picked it up immediately.  I guess kids are used to playing make-believe so it's not something so hard to learn.

Anyway, here are the current rules to for Doggy Game, a game that any kid with basic speech and numbers skills can play.  The game has already evolved and I assume will continue to, but I wanted to get this down in writing in it's most basic form: 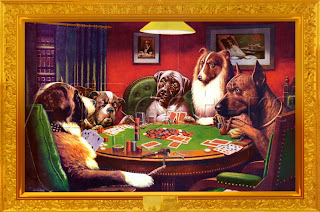 For actions that require a test to determine success, the player should roll 1d6.


And that's really more or less it.  I try to keep it open ended so that the kids/players drive the action.  If they get stuck I give them a few options, or a motivation(you're hungry, you're cold, etc.)
Posted by Nadav at 06:34