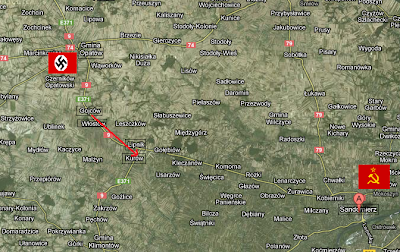 Session four was experimental for me in two regards:
As far as the first point, it was successful, overall. We ran a session and had some fun. We started off with character creation--I think that took longer than it would have in a face-to-face game. Once the game got started, though, it flowed quite nicely.

Andre, after losing the rest of his party in the previous session, came riding into the village of Lipnik. There, he teamed up with Shmengy, a callous resistance fighter with a KIS submachine gun and a penchant for motorcycles and grenades.

They tracked down the barn where the German half-tracks Andre had been tracking stayed the previous night. They interviewed the farmer who's barn was commandeered, but didn't speak to his wife or search the barn.

They headed South on the tail of the half-tracks, only to be attacked by a pair of zombies. These were faster and tougher then the previous batch and had to be blown up or have limbs destroyed to neutralize. Andre caught his headless-zombie in a body-lock, then stuffed a grenade down it's gullet--blowing it to pieces but badly wounding himself in the process.

Shmengy manged to wrangle their two terrified horses and bring Andre back to town where a doctor was called. After a week of regular medical attention, Andre was back on his feet.

While he was bedridden, he sent a letter to his cousin, a German intelligence officer and double agent for the resistance. He asked about the zombies and asked her to send her response to Sandiomierz, hoping to be there in a month to hear her answer. Of course, the mail will only reach there if the Germans retake the city, so he will likely need to search out her response in Opatow.

During the healing time, Shmengy kept his eye out for a motorcycle+sidecar he could steal, but he was wary while working alone and didn't attack the few German convoys that did pass by.

By the time Andre was better, the zombie problem had become common knowledge and people in town were scared. The party recruited an NPC, one Jurek Szewc, who wanted to help with the now widely known zombie threat. He is a resistance weaponsmith and he carries a homemade KIS submachinegun.

So the party left of horseback and with a pack mule, in hope of picking up the now cold trail of the German convoy. They reached the village of Kurow, finding it much like Gojcow: deserted with a chemical smell in the town square. They found a female survivor who told of the Nazis killing everyone, then shoveling some chemical substance onto them. A pair of robed people approached the bodies, but she felt such an aura of fear that she hid and didn't observe anything else. The Germans left an hour later and that night the dead walked in Kurow.

The party stocked up on lamp oil and rations from the small, abandoned general store and prepared to continue South.
Posted by Nadav at 13:41