I've been attending the free Yoga class at my work for a few months. One piece of advice the teacher likes to give is to notice where your body is 'weak' and focus your efforts there. I'm going to apply this lesson to the DnD campaign I'm currently running.

So where am I weak? One place I've noticed is in coming up with fully-fleshed out NPCs. So here is a list of some NPCs for the campaign: 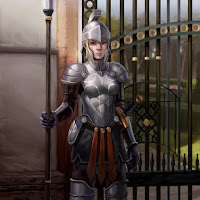 
An officer in the Galluvian army. She is haughty and misandrynistic, yet dedicated to her job to the point of self sacrifice.


The party encountered her in session 2. What will she say when she sees them next?

A local bandit of some note. He was born with unnaturally lucky, such that however many times he has lost everything, he always seems to turn up again with a new lot of ruffians.

The party encountered him in session 4. He still holds a grudge over them taking his "eye".

A prestigious Gulluvian gem dealer. He old and a bit eccentric. He may give the party escort missions, fetch-quests, etc. He will also buy any gems, jewelry, or other fine relics, though he is a discerning customer. He wants his daughter home to help him with business, rather than running around adventuring.

The party gained his good will in in session 4 and started session 5 in his house.. 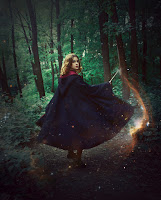 Daughter of mooncow. She is a dutiful daughter, participating in her father's business, but she is also well trained in her true passion of sorcery. A bit clumsy on occasion. She has been feeling the itch to go adventuring. As such, she may join the party or meet them after having run away. 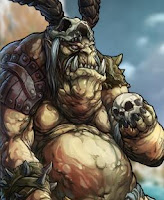 
Big green mean Goblin King. He rules the largest tribe of goblins and has united the hordes, but to what end?

And finally, let's not forget the NPCs mentioned in the module;