Well, here's another session I didn't write up, until now that is! Hopefully, my memory isn't too foggy, it was only a month ago or so...

This one was a bit different than previous sessions in that my two boys were in bed, while my eldest stayed up to play with me and two friends.

I didn't want to have Kevin and Jad meet Princessa in the Palace of the Silver Princess, where the party left off, so we said that they had returned to the village of N'Sau to resupply. They met up in the local tavern but couldn't find sleeping arrangements since the town was flooded with refugees from Gulluvia. The party decided to seek their fortunes in Mere to the East, they decided to leave immediately in the afternoon and camp at nightfall. 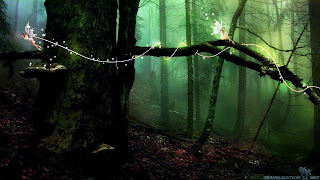 That said, the second watch was interrupted by strange, beckoning lights in the forest. The party dressed and left their tents to investigate. They followed the lights deeper into the forest, then deeper, then deeper still until hopelessly lost. They ended up fighting an bear, Kevin was badly injured, and they spent a difficult night in the forest. At dawn they managed to find their way back to their camp, though all their food had been eaten by animals.

The party returned to N'Sau to heal up and resupply and tried again the trail to Mere. This time, they found themselves being followed by riders. They hid in the forest and saw a whole band of bandits was on their trail. Their leader, a cunning looking old coot with an eye-patch, ordered them to sweep the forest in search of the party. The party engaged the bandits. It was a close battle. Jad was badly wounded, but the bandits were defeated and their leader captured. A close investigation of his person revealed a very nice emerald in his eye. 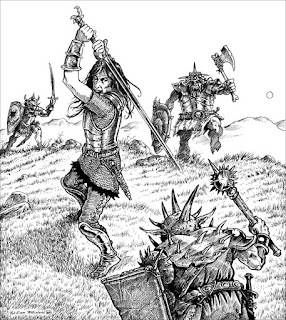 The party made it to the Halfling village of Mere. The locals were very hospitable, especially to Kevin. They took charge of One Eyed Jack, the notorious bandit leader, pointing out that his gang would surely ransom him(yet again) in a few days. He was angry with the party for taking his gemstone and swore revenge.

The party decided to check out war-ravaged Gulluvia. They defeated a group of Goblin Scouts and entered the city. They found a jeweler, but his residence was besieged by a squad of Orcs. The party defeated the Orcs and the jeweler was so thankful he gave them a good price for Jack's Eye-Socket Jewel.