Picking-up from last session, the party decided to send a few members up to the door of the reputed necromancer Italka's stronghold to request a parley.

Said door happened to be unlocked with two Goblin guards sleeping on the floor. The party first attempted to strong-arm them into taking us straight to Italka. But one of our Dwarves lost his cool and the cheeky bastards sounded the alarm before dying horribly.

The party decided to make their stand in the adjoining room, rather than in the hallway. We barricaded the doors with the room's tiny furniture, but when Seigwart smashed his way into the closet full of tiny ladies' frilly things, they heard a squeak from under the bed. A female halfling was hiding there, but much too terrified to converse. She indicated that Italka is away. 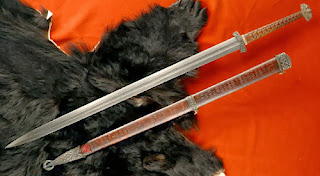 A wild melee ensued with goblins smashing down the barricaded door and pouring through the other. Well, things really heated-up when a fully armoured Chaos Warrior came running in. He and Sigyn took one look at each other and both went berserk(Sigyn as a result of her magic sword which is dedicated to some other Chaos god). Well, the party took some hits(especially my PCs) but made it through.

When the Chaos Warrior finally fell, Siegwart asked Sigyn if she was OK. She replied in a spooky voice "There is no Sigyn, there is only Midgarðsormr", continuing to insist on the new name even after the berserker rage has left her.
Posted by Billy at 00:44