Following up from last session, the party finally arrived in Cairo!

Settling in the Osiris Hotel on the West side of town, the party met up with Bob, a young Texas Ranger on  vacation. He has already taken in the sights, and is looking for a diversion, so he decided to team up with them!

Since none of them speak Arabic, the party found a local guide on the street. He took them to change Dollars to Egyptian Pounds near the Post Office(they got 13 pounds to the Dollar). 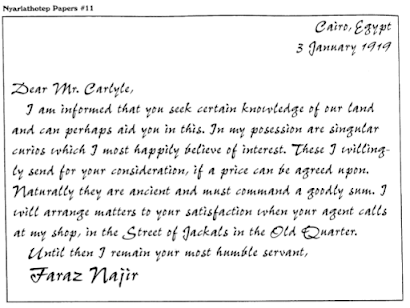 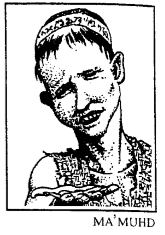 The party considered visiting the Egyptian Museum Library, but decided first to visit the Old City in pursuit of a lead on the Street of Jackals. Unfortunately, he was not to be trusted. The guide and his brothers mugged the party, but were defeated. Alan discharged a firearm illegally, so the party had to flee. A young dirty street boy named Machmud helped them hide and agreed to guide them from this point on.

They found that Faraz Najir's store had burnt down and was being rebuilt by some rich foreigner. A local woman told them that Najir was a good Muslim but had angered "the old gods" and a demon had come down from the heavens and burnt him and his store. The site still glows eerily some nights. He has a new store near one of the old markets.

They tracked down Faraz, but found he was not interested in discussing the Carlyle Expedition. He warned them of the dangers of dealing with such powers, then fled into a local Mosque. He managed to give them the slip there, but they stole his shoes from the entrance to the Mosque. The Imam agreed to arrange a meeting for them with Najir the following morning.