Around mid-day. The party spent the morning snooping around the ruins in Memphis while Helen participated in the dig with fellow Clive Expedition members.

She snuck away to share a juicy lead with the the other Investigators.

The expedition members don't know I understand Arabic. While I was cleaning off the day's finds with Martin, Dr. Clive entered the tent and addressed him saying "I've just had a message from Omar. He says he's discovered the location of the girdle, in the Mosque of Ibn Thulun. He will have it in his possession in time for the next ritual. He'll want our help in preparing."

While checking on the boat, they noticed the flash of a spyglass from the expedition's camp and thought they heard some notes of a chant on the wind.

Choosing to return to the camp to get a better look, they saw Dr. Clive entering hurriedly from among the dunes. They wanted to follow him, but the guards barred their entrance. They told the guards that they needed water for the trip to the tram. Finally the Dr. sent out Agatha Broadmore with a camel loaded with water bags to lead the investigators through the sands to the tram stop.

They agreed to accompany her but were suspicious of her and the water. They also thought they saw shambling figures and moving sands.

Suddenly two sandy, emaciated figures materialized, rising up from the sands themselves, waving wicked claws at the party. They proved very hardy opponents, but Michael's double-barreled shotgun saved the day, killing one, while the other fled badly wounded.

Agatha was left shaken by the encounter. She attempted to psychically connect to the creatures to calm them, but learned that Dr. Clive had made a pact with them to slay the party. Shaken at revelation that her employer was a cultist and that he sees her as expendable, she agreed to join the investigators on the tram-ride back to Cairo. 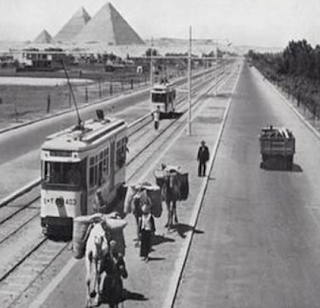