Here's the game map(made in Hexographer) from an OSRIC PbP game I ran back in the day.  The idea was that the party was on the Western Frontier of a large empire, centered to the East(not pictured).

It was a fun game, though slow, as PbP tends to be.  The party started in the Lankmareque port town of Warren's Deep, braved the Hills of Amorach, just outside the Fiefdom of Dappenshire, confronted The Green Knight, defeated a local bandit gang(barely), invaded a cyclopian city infested with degenerate dog-men, etc. 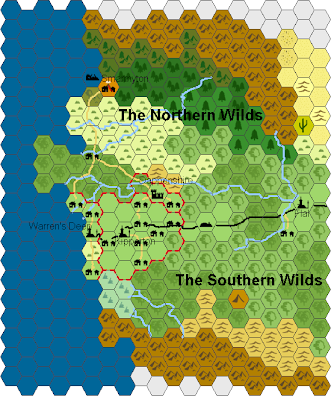